Was at the Emmaus Encounter from Thursday 21 evening till Sunday 24 evening.

Had simply a wonderful experience.

Reached the place sharp 6.00pm and registered and settled into my room. Must confess that I was a little apprehensive about staying there, but had made up my mind to not let it bother me.

We began the Encounter with a short Praise and Worship followed by which we were given an introduction to Emmaus.

And, I must confess I am horrid at names. Though, I will say that the Encounter was facilitated by Francis from Mira Road.

Had some prayer time before bed.

Had a rather mixed sleep. I say mixed because though I slept soundly, I kept waking up every hour. Maybe in anticipation of the events of the next day or maybe because I just wanted to wake up and get ready on time.

Woke up finally at 6 pm and had a quick bath (yet another challenge as I am not used to bathing in unknown places).

We began the day with Morning Prayers and then had breakfast.

Food was a worry, but the previous day’s dinner and today’s breakfast got rid of it.

On Friday we had sessions on God’s Love followed by SIN.

We celebrated the Eucharist and I did the reading 🙂

Had a small Group Sharing after lunch and then teachings on Salvation and Forgiveness before and after tea.

Fr. Roland then gave a short rundown on New Life in the Spirit

Finished the day with a session on Reconciliation before dinner.

Began Saturday with a session on The Ten Commandments. We were thought how to remember and more importantly the significance of them and how we have to follow them.

Francis then gave us an intro to the Bible. This was a very informative session because this is something that I was looking forward to.

I was also surprised when I learnt that both the Old and the New Testaments are similarly structured into four groups viz. Law, History, Wisdom and Prophesy.

Also went for confession in the morning. We have been taught to have dialogue confessions and to concentrate on one sin at the time. So, that is just what I did 😀
Also had a very heart to heart talk with Francis on a matter very close to my heart (lots of hearts here :X ) and was rather pleased with the end of it.

We celebrated the Eucharist after this, which was so much more meaningful now that I was clean :D:D:D 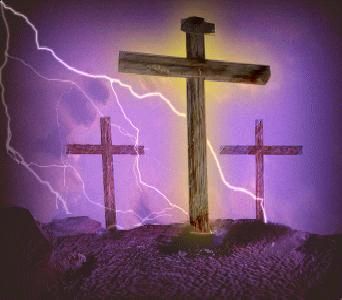 The next session of the day was by Francis on the Cross.

He also told the story of the three crosses, one which I had heard on Good Friday this year.
To tell the tale:

Following this session was one Inner Healing. Was a very refreshing session. Prior to it, I didn’t even realize that I needed this session. I also implemented the teaching on Forgiveness.

We began Sunday morning with a session on Infilling of the Holy Spirit. Have been praying for something dramatic to happen. It didn’t but I know it will when He thinks the time is right.

Had a talk on the Spiritual Armour which we very much need as we attempt to live a “holy” life.

And the final session for the day is what I liked to call “What now?!?”
To put it simply Fr. Roland told us about the Six Spokes to a healthy Christian Life, viz. Prayer, Word of God, Sacraments, Community, Service and Devotion to Mary.

Following lunch, we had the celebration of the Eucharist and then packed my bags and headed for home.

Didn’t do much at home as I was pretty exhausted. Besides, it was work as usual on Monday 🙂

Must say yet again that the experience was wonderful. I came back refreshed and filled 😀