After mass in the morning I went to Canossa to show Sr. Nellie the image I made. Unfortunately their PCs are rather old and didn’t have a USB port so my flash drive couldn’t work.

Headed home and burnt a CD to take there. Rhea called and said she was leaving. We were off to watch Fantastic Four at 24 Karat.

We reached well in time for the 2.30pm show and bought their Platinum tickets (balcony). The theatre turned out to be rather good and we even got 100 bucks worth food coupons (abuses about this later). 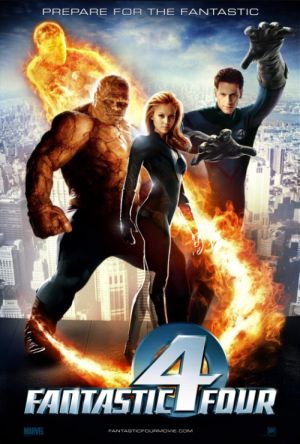 When an experimental space voyage goes awry, four people are changed by cosmic rays. Reed Richards, inventor and leader of the group gains the ability to stretch his body, and takes the name, Mr. Fantastic. His girlfriend, Sue Storm, gains the ability to turn invisible and create force fields, calling herself the Invisible Woman. Her younger brother Johnny Storm gains the ability to control fire, including covering his own body with flame, becoming the Human Torch. Pilot Ben Grimm is turned into a super-strong rock creature calling himself Thing. Together, they use their unique powers to explore the strange aspects of the world, and to foil the evil plans of Doctor Doom.

The above description is a bit inaccurate, as it wasn’t four but five scientists (including Von Doom) who went off to space to study the cosmic rays (actually some kind of molecular storm) and Von Doom decides to use his powers for evil.

The movie was rather cool. Quite a good amount of humour and excellent special effects. Storm kept us in slipts with his many wise cracks.

Went to Planet Veggie (read my review here) after this and then headed to Pizza Hut in Andheri East.

Ate a good deal there. After this we stopped over at Canossa and I showed the nuns the graphics. Will make a few adjustments by next week.

Well, dropped her home and then headed back home. Work tomorrow as usual.