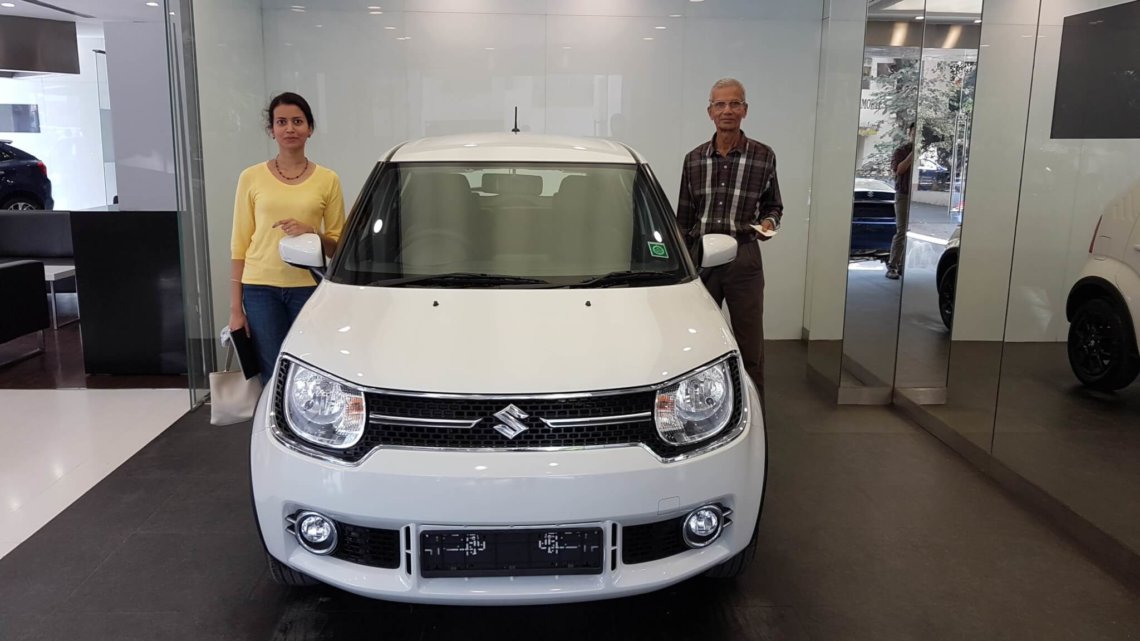 After a week in Mumbai, Ashwina and I set off to Pune to spend time at her place with her Mom and Dad.

I like going to Pune because, unlike Mumbai, I get to spend a lot of time resting and relaxing. As expected, this holiday also delivered the same. I even had time to work on my WordPress plugins as well as catch up on office work.

Ashwina planned to buy a car in Pune for her parents to replace a very old Maruti Suzuki Alto. She had shortlisted the Maruti Suzuki Ignis and we had the vendor send us a test drive vehicle on Friday.

We decided to go ahead with the Ignis and paid the booking amount on Saturday followed by the rest of it on Monday. The car was ready to be collected promptly on Thursday morning.

We met Saby on Saturday evening for dinner and drinks. Dinner was at The Sassy Spoon in Koregaon Park.

The Sassy Spoon turned out to be a bright and rather alive place with a good atmosphere and music. I had a rather funky pani puri martini which is essentially the pani puri masala water with a kick. We also had chicken and prawns for starters and I dug into Ashwina’s Goan sausage mac and cheese for mains. In short, we really enjoyed the food and drink at The Sassy Spoon.

After dinner, we took a short walk to The Bar Stock Exchange. At first glance, this appears to be a bar at the top of the mall. I think it might actually be the case. The bar is conceptualised on the prices of stocks in an exchange with prices of drinks going up with demand and down as demand falls. However, you definitely can’t sell your drinks back to the bar! Saby and I had two rounds of Oban (my regular) at TBSE while Ashwina had a virgin hot toddy. This was definitely a made-to-order for her as they don’t serve tea.

After this, we headed over to the Westin with a plan to kill time at the [email protected] which we first thought was a lounge bar. However, it turned out to be a club with some extra loud music. Ashwina and I were definitely not keen on this.

So, we set out, on foot, to the Oak Lounge at the Marriott Suites. This turned out to be yet another club with loud music. However, Saby convinced the manager to let us sit in the bistro area below the club and order some food and drinks at the club.

After spending a few hours there, we called it a night and got ourselves an Uber to drop us home.

We woke up nice and late on Sunday and headed over to Akshat’s place for lunch and to play with his super cute daughter! He has a nice place in Baner and had his cook over earlier in the day to make some pav bhaji and pulao. After a few hours with chit-chat, we headed back home before setting out to church for evening mass.

Mass turned out to be quite long with it first starting late, then with a very very long sermon and a rather bad choir. Things used to be a lot better managed when Ashwina conducted the choir in this church!

Monday morning was spent settling the car purchase, particularly sorting out the transfer of funds. Getting things done with online banking can be very painful.

On Monday evening, I met up with Rhea for dinner at Malaka Spice in Koregaon Park. They serve pan-Asian cuisine with some interesting dishes on the menu. It’s famous for its Thai dishes which unfortunately is not my favourite cuisine. I did relish the jaggery ice cream!

The rest of the week

Tuesday and Wednesday were relatively relaxed for me. I released an update to Knowledge Base, my WordPress plugin, on Tuesday. I spent Wednesday blogging and catching up on work.

On Thursday, we took our flight back to Mumbai. Pune airport is small but can be rather efficient as a result. They have been doing quite a bit of work around improving the retail and F&B offering at the airport, especially the latter. We had eaten a good lunch before coming to the airport but there is always space for some more. Our flight was short – about 30 minutes and we arrived in Mumbai ahead of time.

Mumbai traffic was a completely different story. We took nearly 90 minutes to travel the typical 20-minute journey from the airport to our home!

Thursday was a busy day. We went to meet my dad’s mom for a quick visit, followed by some shopping and Ashwina’s dentist appointment. We packed and packed some more in the evening as we had the flight back on Saturday.

Due to work on Mumbai’s runway, the afternoon flight to London was at 10.30am which was fantastic as it got us into London before 3 pm. We did a bit of shopping at the airport and grabbed some food in the lounge. I made full use of the flight back by fixing some bugs in Better Search.

Returning back home in London has been good. It’s been mainly unpacking and laundry today which will go on for a few days without a doubt! And, it’s back to work tomorrow…