How to get the ECNR

This is a follow up of my post How not to get an ECNR. I was meaning to write this on Saturday but was kind of tied up in things.

Went last Monday to the passport office. This time I was armed with everything that was needed, viz. Ration Card, University Certificate, Final Year Marksheet, Bank Statement and Bank Passbook and two copies of all these.

This time we went a bit later i.e. around 10.00am instead of standing out there at 8am as we did last time. Didn’t take us long to enter in and stand in the line there.

The counters timing is from 10am but they never open before 10.30am! We stood in seperate queues to see who reaches first. She did and I followed ten minutes later.

What is interesting to note is that the person at her counter took all the documents I mentioned above, while the person on my counter returned my bank documents :O

One important point to keep in mind when you visit the passport office is to open your mouth and ask! I didn’t do that this time and hence the reason this post is today and not last Tuesday!

The notice for receiving the passport with the stamp states:

Collect it on the 2nd day

I assumed that the 2nd day would be the second day after you submit the passport. Turns out that they actually meant the next day!

So I went to the Passport office on Wednesday, and patiently stood in a long queue for over and hour, reached the counter to be told that the passports were already sent via Speed Post!

Speed Post is rather slow I realized when it comes to delivering your passport. What normally takes two days took four! 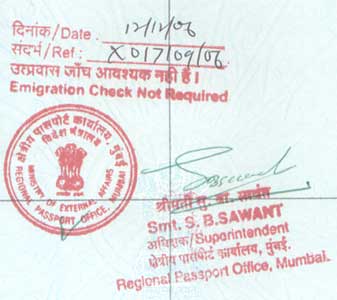