Wishing everybody a Merry Christmas!!

Come 24th December for the last two years, only brought a little cheer with a lot of exam fear and so the occasion wasn’t all that enjoyable. However, this year, the major papers are over and the next is on 29th and so it was . . . . . . . . . PARTY TIME :O:O

I began the 24th with going to Worli to the passport office to renew my passport. It was real timepass, as I rode to Worli by Kinetic with my dad. This is my second trip to Worli and I seem to be getting used to it! The passport office was fun, though we stood in the line for nearly 3 hours. Met a lot of people there and was real timepass talking to everyone out there, sharing their experiences and lives. Funny how people talk so opening to people they just meet. Went off for lunch to Lucky, completed some work, checked out a few TV showrooms (We are finally buying a new TV!) then came back home.

We were singing Christmas carols in the evening before mass, so I got ready with my one and only sexy blue blazer and my new contact lens. My contact lens are a real confidence giver and yesterday I really was an exception to my usual self (details follow).

Reached church by 9 p.m. in time to sing the carols. Then we sat back and listened to mass (few capers which I choose to omit). It was rather short, beginning at 10 and ending at 11.30, long before 12a.m. i.e. long before Christmas. Inspite of this, I wished everyone, including the choir folk a merry Christmas.

Immediately after mass went off home to drop off my blazer and tie. I had forgotten my cell at home while leaving for church and found a lot of messages wishing me for Christmas. Melody also called up around 12 to wish me. So I wished Delilah, Elvis, Simone and Melody (in order of wishing). Just as Clayton and I were leaving, we met my mom and dad and so wished them as well.

Next dropped by Clayton’s place for him to change in casuals and to pickup cds for the party. I also spoke to his life long darling Priya. Her pics below. Doesn’t she look so cute! Speaking to her was like speaking to an angel. Such a beautiful voice! And after all that I have heard about her from Clayton, I am sure she is a really fantastic girl. I hope you are going to introduce me to her soon Clayton. I am sure you wouldn’t mind me getting to know her :O 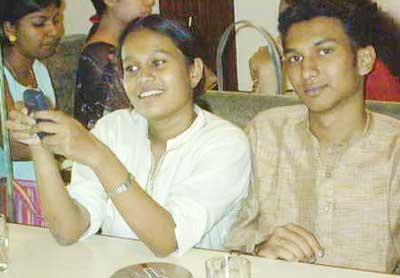 Met Sumi at Swagat and then went up to U. Conrad‘s place. That’s where the party was happening, if you haven’t guessed till now. Many had come and many had still to come.

Clayton played dj as usual. Started off with jive, which I still need to learn. But then he put on the ‘normal’ music so I could freestyle, which suprisingly I did a lot, and I have always been the quiet one when it came to dancing. I guess Clayton wanted to party all night (so did I), so he refused to play the slow music. Until finally he was informed that people would be leaving at 3am. So finally he put on the waltz and other slow songs, something I can do, even if not that great.

I asked Madam A, one of the most beautiful women I know, to dance with me and she obliged :-D. She was looking even more gorgeous yesterday than she normally does, especially with her curls (don’t freak out Madam A, if you read this). When I walked in, she was wearing a red top and a santa cap. Every guys dream of Santa belle ;). The curls really suit her and she should go with it more often.
Anyways, I danced with her for several numbers and it was real fun. After sometime we realized, we are just going around in circles, so she got hold of her mom to teach me the cross step in waltz. A. Kay is a fabulous dancer and an even better teacher. In a short ti

me, I had gotten the ha

ng of it. Now, all that is left is a little bit more practise, which I hoped to practise with Madam A (Did I mention she was looking extremely beautiful). Didnt get the oppurtunity to dance again as it was already 3am, but we got New Year!!

I will add pictures of these soon. Conrado will be sending Clayton some in January, so I will add these here :). Conrado is Havilah’s cousin from Spain. He speaks in a fantastic English accent, which makes him rather hard to understand. But is really great fun, always cracking jokes. I guess it runs in U. Conrad’s family

Got back home and slept from 3.30 am to 8 am. Sat to update this blog, however, being an offpeak user, wasn’t able to complete before 10am. So here I am. Composed a long and detailed blog entry offline and have posted it here.

Don’t know what my plans are for the evening. Will keep you posted on that. In all it’s been a very eventful Christmas. I learnt to waltz a bit and now I need to jive. Are you reading Melody?