First we had boxers and when we realised that they could be replaced by something less destructible, there were robots. Real Steel tells the story of one such robot, a promoter Charlie (Hugh Jackman) and his 11-year old son Max (Dakota Goyo).

When Charlie makes a deal to sign off custody of his son Max, little did he know what he was getting himself into. After several failed robot boxing events, Charlie is on the brink of losing hope, when Max finds a scrapyard robot. Little do they know that this junkyard bot would one day bring them back to the limelight. 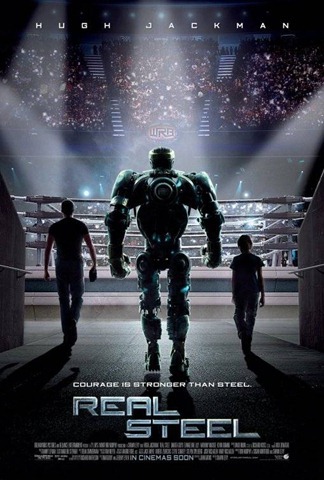 Real Steel is a brilliantly made movie. Hugh Jackman has always been a brilliant actor and he definitely doesn’t disappoint. And, this time he is well supported by Dakota and Evangeline Lilly (known for her role as Kate in the TV series Lost).

The graphics in the movie are well done, especially the fight sequences between the various robots. Through in some music and dance, a lot of humour and some drama and you’ve got yourself a winning movie.

If you haven’t watched the movie yet, do make sure you watch this in a theatre.