I had posted about how frustrating the entire application process for XLRI has been.

Yesterday my friend and I set out to buy the forms. She has called up the State Bank of India, Mahim branch which was selling the forms.

When we reached there we were told that they didn’t have forms since the past two days. Those dumb folks got confused between XLRI and XAT forms.

There was no point arguing and we would just be wasting time, so we went to the Shivaji Park branch. This is a place I had visited twice before to get the XAT forms and then we just stuck to Mahim. This branch too (as expected) didn’t have the forms.

We had two choices, one to go back home and retry the “online” process and the second was to try the Fort branch. We called up the same and were told that the forms were available.

Then began the long ride to Fort. I have been to Fort only a few times usually with someone who knows the area well. This wasn’t one of those times. 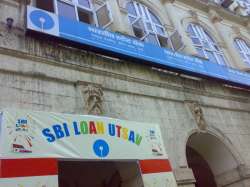 I knew how to get to Marine Drive and finding Fort after that wasn’t too difficult. Somehow things just worked out and we managed to land up at the Horniman Circle branch of SBI without any trouble 🙂

Parking is always a trouble in town and yesterday was different. So, I just sat outside while my friend went in and picked up the forms. The persons we picked up the forms for should give us a commission for the troubles we have taken!

Not knowing town has its disadvantages, the primary one being you can get lost. We did somewhat!
Took the wrong route back, landed up around Flower Market and took the route towards Dadar (E), someplace we both recognized.
Crossed over, headed towards Bandra and stopped at Adi’s for a very very late lunch (it was almost 4pm!).

By the time we got home, it was past 5pm, had a sore backside, was extremely exhausted and had traveled about 60kms!

And now, we have to fill the damn details online, get a printout and send the forms. I really can’t understand whether this process is online or offline!

And you pay a bomb!
So much for applications…

Tags:managementMBAMumbai
previousWhen I say, “I am a Christian
nextReviewMe: First Impressions