Statue of Liberty and Ellis Island

If you’ve been following the last few blog posts, you’ll know that Ashwina and I are in New York and wandered around Times Square at the start of the week. It goes without saying that most tourists have the Statue of Liberty and Ellis Island on the top of their places to see. And so did we. Let me tell you about our fun visit to see Lady Liberty.

I spent a good deal of time researching where to buy the tickets – or more like what would get us the best sightseeing deal. We looked at the New York Pass which allows you access to several attractions, but the numbers just didn’t stack up. So, I decided to buy the tickets directly from Statue Cruises, who are the only authorized official provider of tickets to the Statue of Liberty and Ellis Island. I realised that they were also the cheapest because I bought the Pedestal Reserve Ticket which gave us access to the pedestal on which the Statue sits.

We got lucky as there was no availability for these tickets for several days except Tuesday! Unfortunately, the Crown Reserve Ticket was sold out. People book these several months in advance.

It’s also recommended to do one of the earliest slots of the day as they tend to be less busy. We booked ours at 10 am, which is the time we needed to enter the Screening Facility. Battery Park is just a short walk from our apartment, so we set out around 9.30 am and found our way to the screening facility well ahead of schedule.

The screening facility is airport-style which means travelling right and light is recommended. We carried only bare essentials knowing that we could buy water on the island. The process went smoothly and we then queued in a completely unorderly fashion for the next ferry to take us to Liberty Island.

We picked the upper deck to get a seat and an open view of the water as well as the Manhattan skyline which was fully covered in fog. The upper deck also tends to be quite full with eager standing tourists during the short ride to Liberty Island. The best way to get your first photographs of The Statue of Liberty. 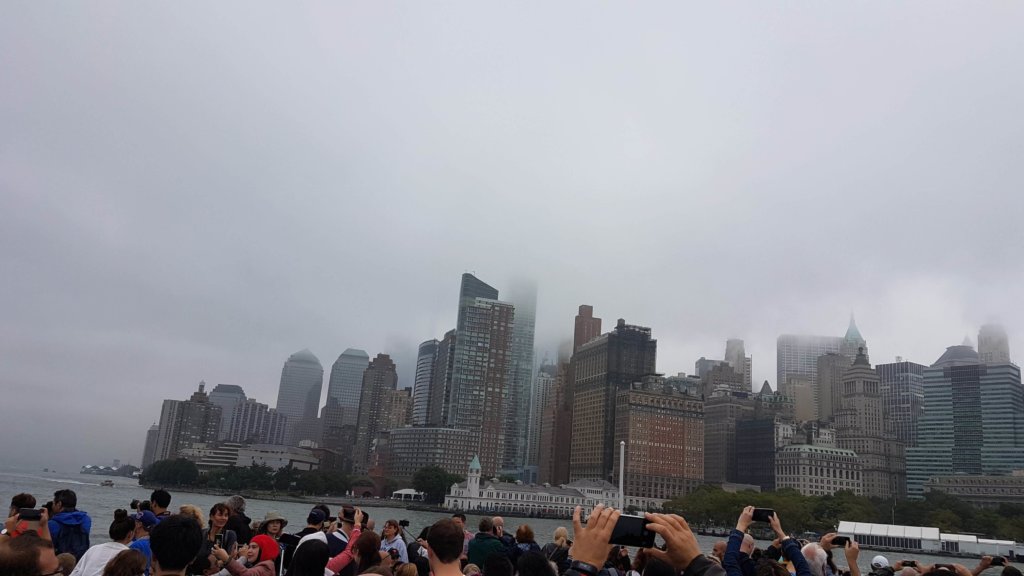 The Manhattan skyline covered in fog 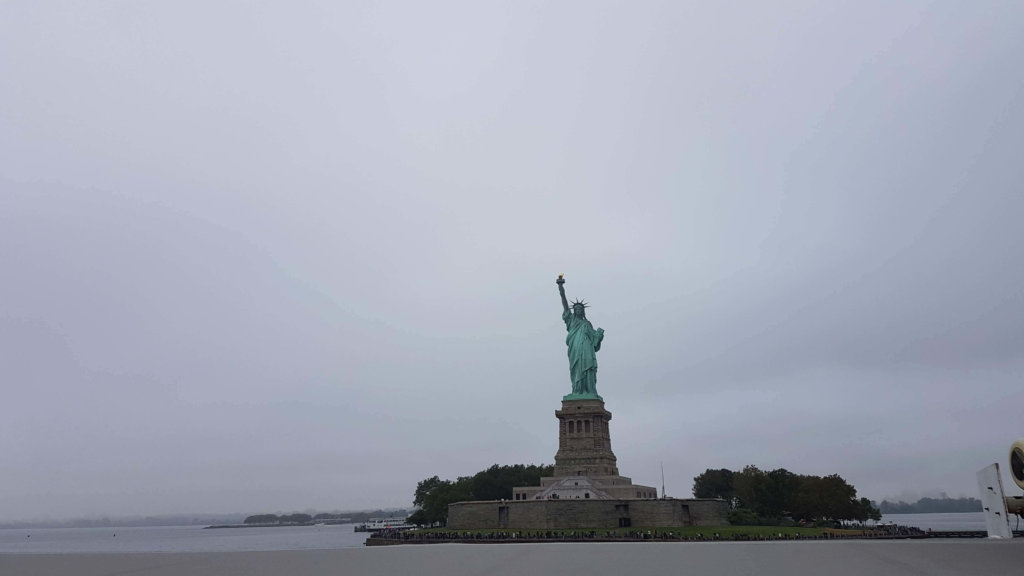 The Statue of Liberty

To the Pedestal and Fort Wood

Once we disembarked from the ferry, we decided to head straight to the Pedestal instead of walking around the statue. You’re not allowed to carry anything other than water and small bags and everything else needs to be placed in a secure locker. We didn’t even have water, so walked straight through and entered the pedestal. Just as you enter you see the original torch which was replaced by what you see today. 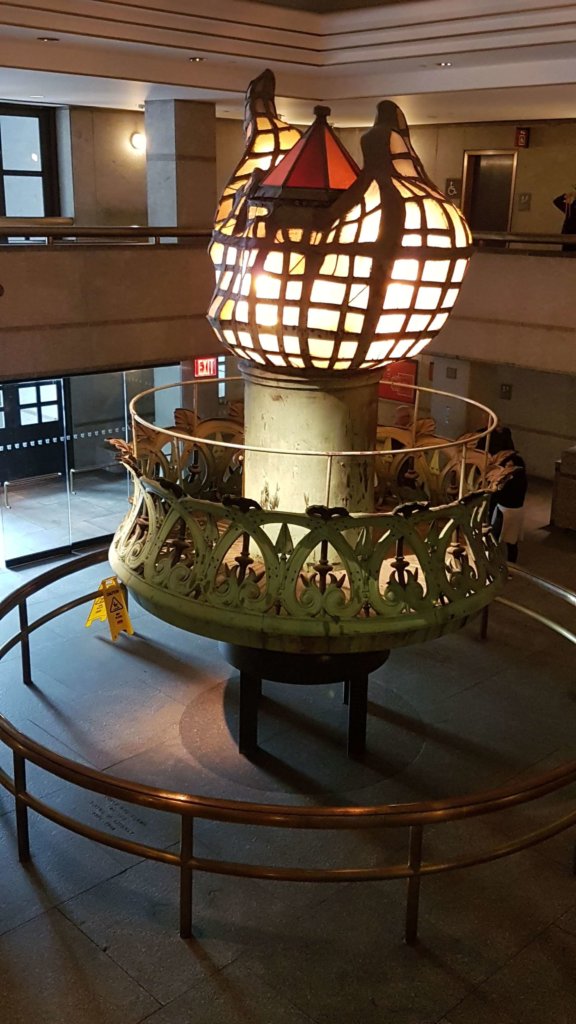 The original torch of the Statue of Liberty

We then headed down and out of the pedestal to check out the rest of Fort Wood. Although several levels below the top, it still offers spectacular 360-degree views. It’s a pity that we had way too much fog affecting visibility massively. 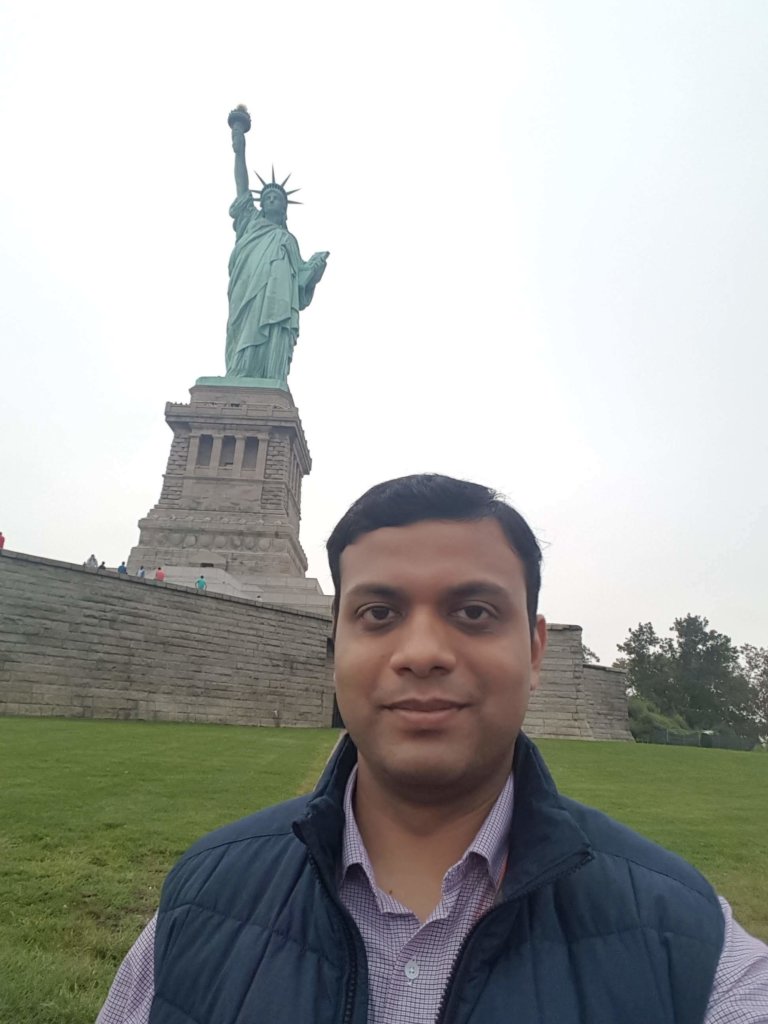 Me and Lady Liberty

Having walked around Fort Wood, we visited the Museum which gives you the entire history of the Statue of Liberty and the Pedestal. As well as a lot of fun facts! Did you know that the French paid for the Statue and America paid for the pedestal? The metal is the thickness of two pennies and is green today as a result of oxidation. 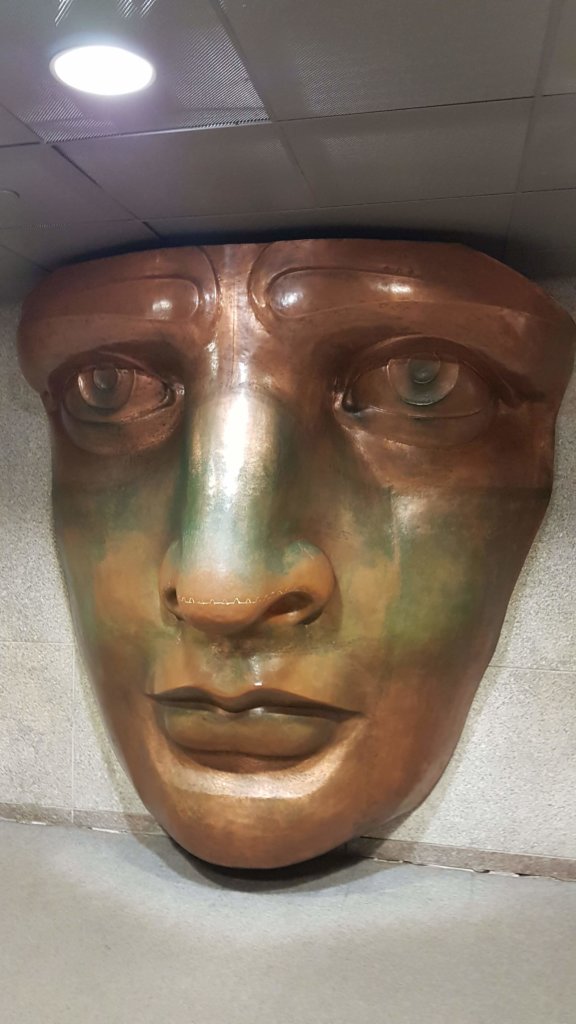 True-to-scale replica of the face 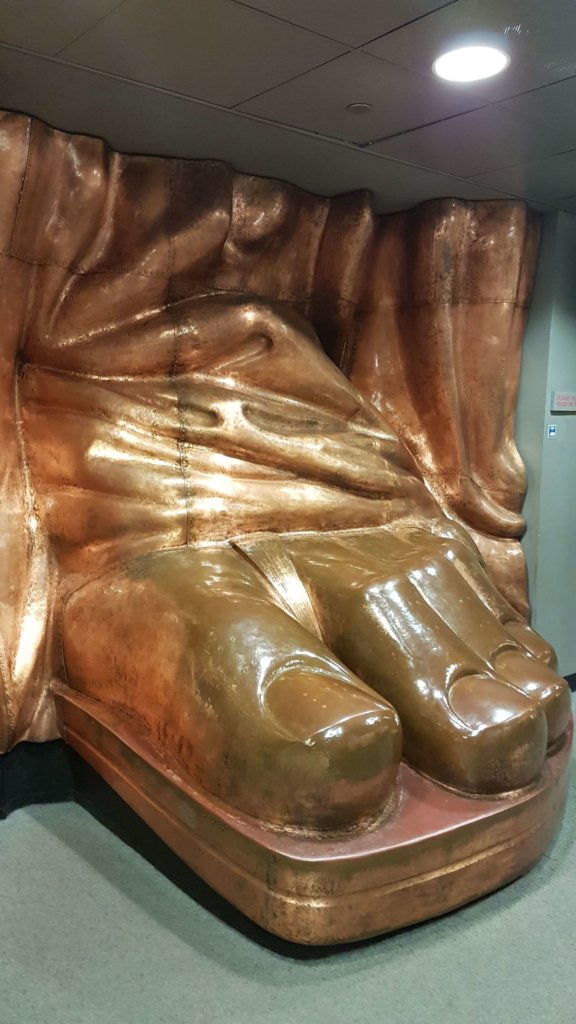 Replica of the foot of the Statue of Liberty

We were hungry by the time we were done with this part of the tour and so picked up some burgers and water at the Liberty Cafe. It definitely wasn’t the best burger we’ve eaten but it helped fill our bellies enough to give us fuel to walk around the island and then take the ferry to Ellis Island.

The journey to Ellis Island is also short and it looks just the same as it over 100 years ago when the first immigrants found their way into the land of opportunity. Ellis Island also has an excellent visual tour that tells all about immigration over several hundred years into America. 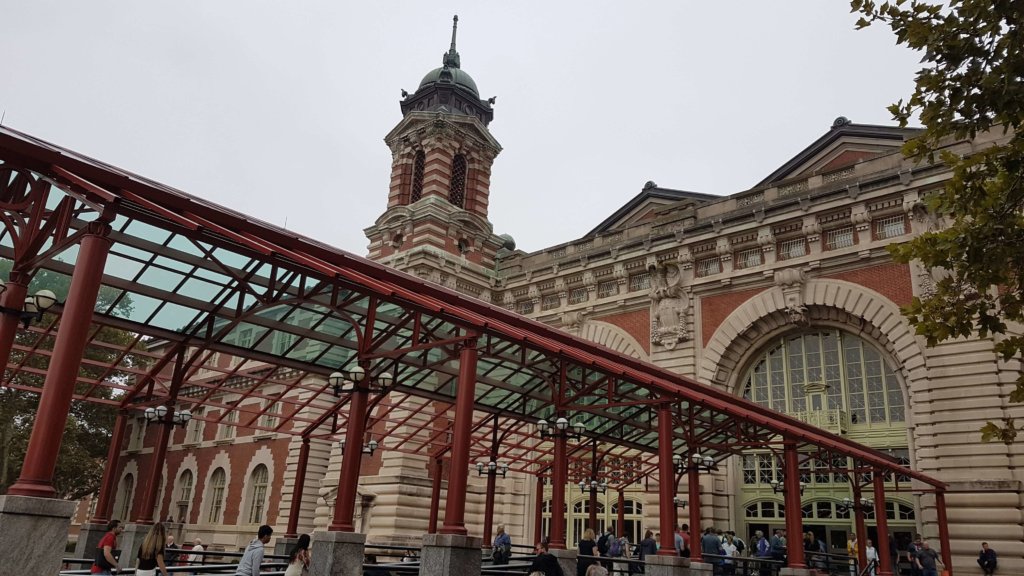 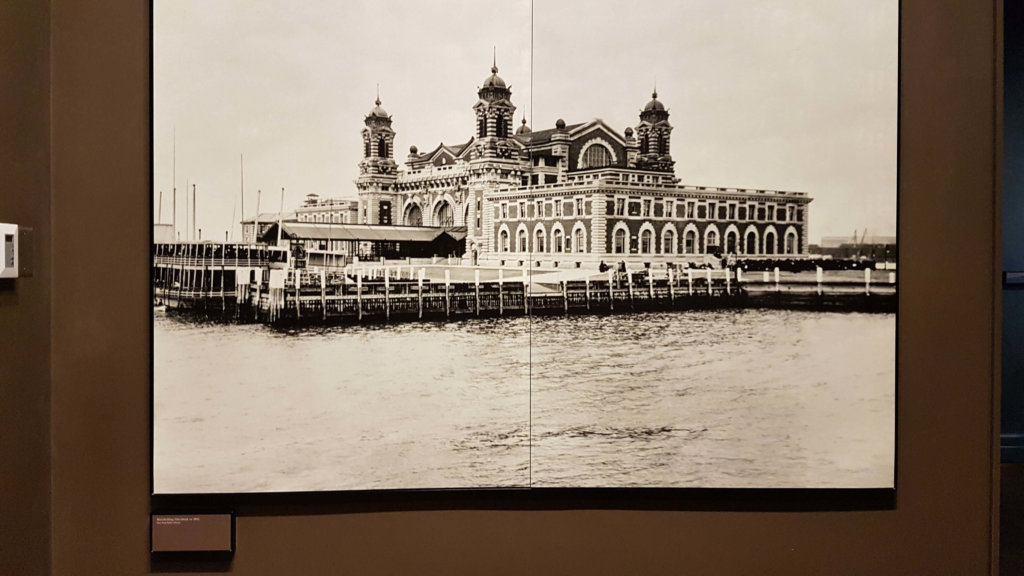 There is actually quite a bit to see in Ellis Island, but we were quite tired by then having been on our feet for several hours. We decided to call it and headed to catch the ferry to Battery Park.

By then the clouds had started to lift and so we caught slightly better views of Manhattan on the way back. We also managed to get the must-click photos of The Charging Bull and the Fearless Girl. 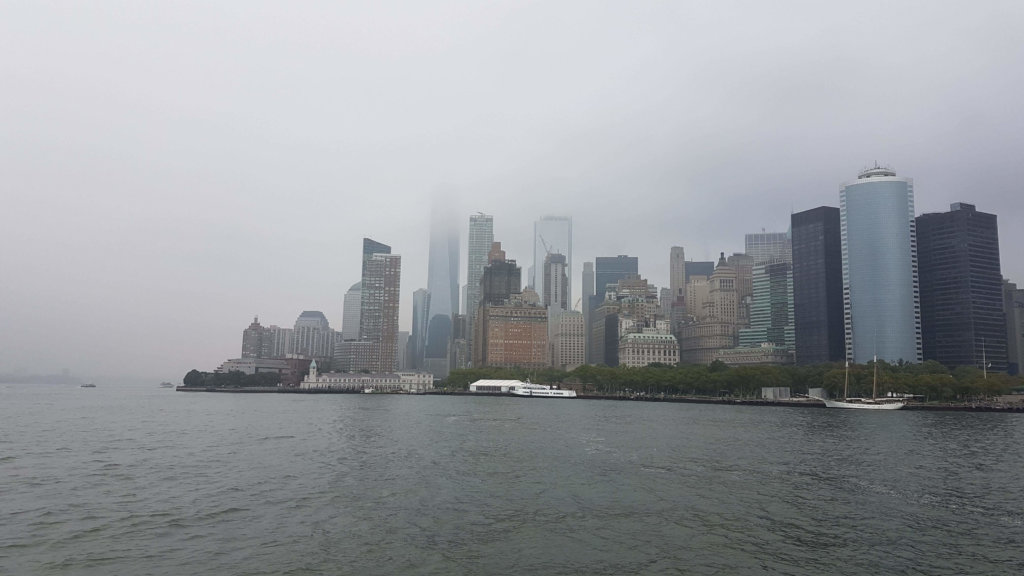 The fog starts to lift to reveal the Manhattan skyline 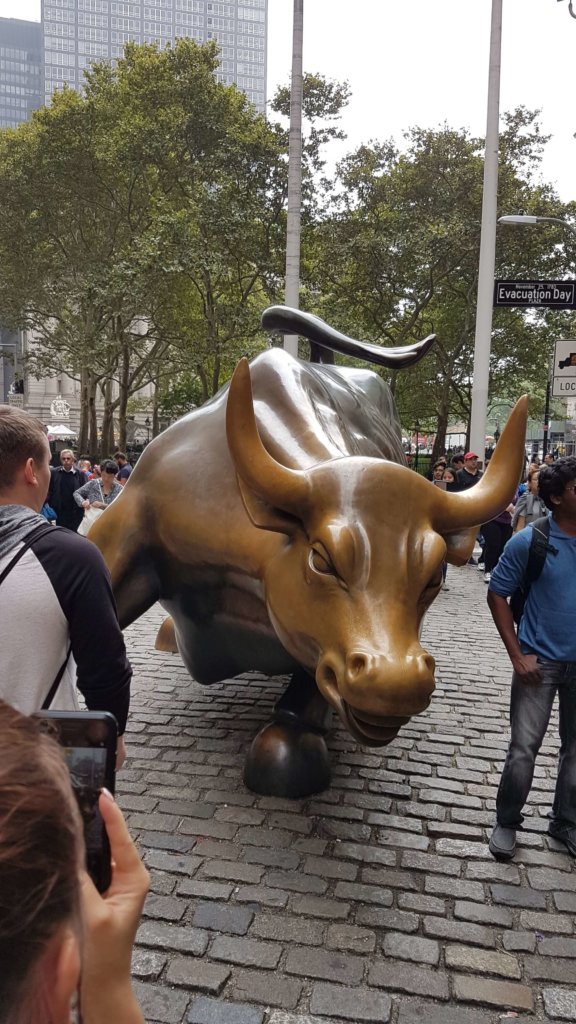 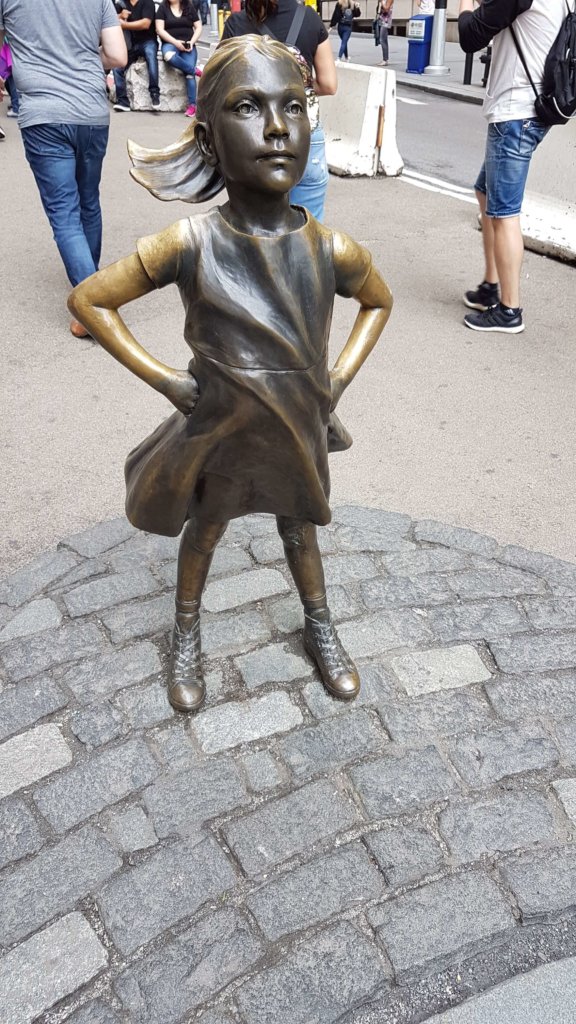 Later in the evening, I set out again towards the World Trade Center to catch a glimpse of the Tribute in Light, before calling it a night. 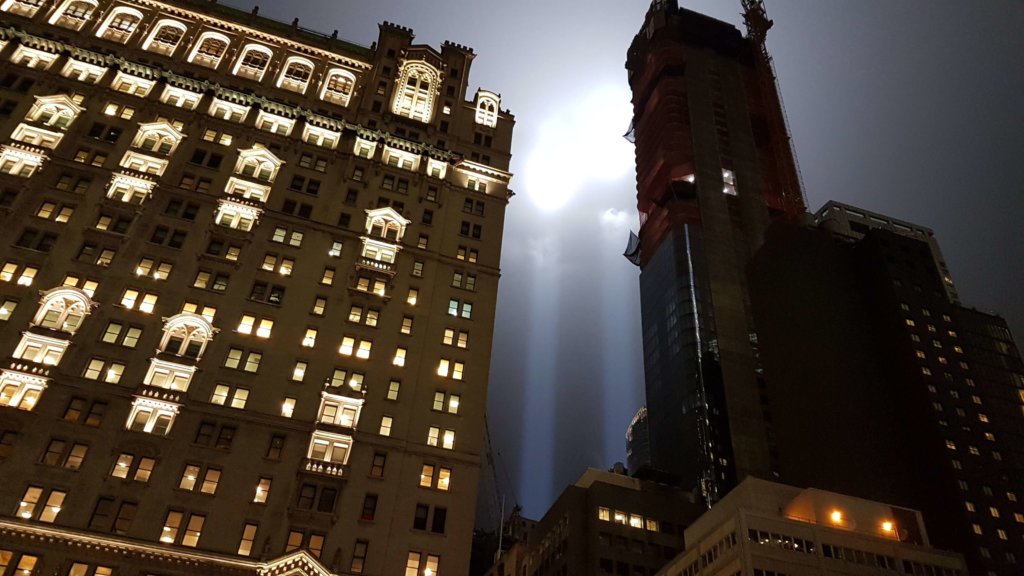 The Tribute in Light