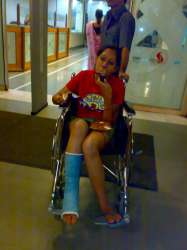 Last Weeks at SCMHRD and Mumbai

I returned to college in mid March for the last two weeks at SCMHRD; two weeks filled with exams and vivas. Began first shot of… Read More »Last Weeks at SCMHRD and Mumbai

Semester 3 is definitely lighter than the past two semesters, possibly because I don’t have admissions work 🙂 Have spent the last week interviewing juniors… Read More »Interviews & Mumbai Calling

This day last year, more than 180 students found their way to a Business School in Hinjewadi. The school was Symbiosis Centre for Management and… Read More »Ek Saal Baad

It is Finished! SCMHRD Final Merit list is now online

As of today, the Admissions Process has finally come to an end. The Final Merit List for SCMHRD is now available on the website. Admissions… Read More »It is Finished! SCMHRD Final Merit list is now online

At the time of this post, I have been awake for 24 hours, of which almost all of it was spent in the admissions room.

Have I been busy or have I been bored, considering my last post was two months back!

This team was instituted after Ravi and I joined / founded it. And work was hectic the last week of August and the first week of September.

While we did get the SCMHRD site up and running, as you can see it is painfully slow. There’s absolutely nothing I can do to speed it up except redesign the entire site.

I’ve been working on a layout and speeded up the entire thing. A test site has worked decently, but I guess I will have to move away from tables totally as I do with all my other sites.

As part of the team, I spent a lot of time in the Admissions room and so was asked to join it officially…
Read More »Life Last Two Months

Had written in yesterday about the NMAT being held on Sunday. My center for the same was Satheye College in Vile Parle. Picked up AJJ… Read More »NMAT 2006

Today was eventful, in the sense that I finished the application work of two more colleges, viz. NITIE and MDI. I still another 4-5 colleges… Read More »Two more done, few more to go