This review was originally posted by Madam A Lobo at the now defunct Humble Reviews. 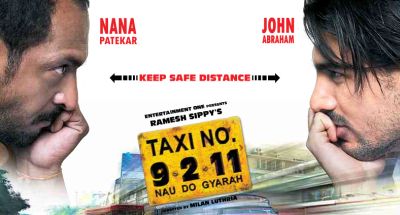 The saga of 2 Men, One a lowly “Mumbaiya” Taxi Driver, the other, the son of a prominent Business Tycoon, banging into each other literally!!

Though they come from very different backgrounds, they share the same stubborn, headstrong, impulsive, impatient nature (and birth-date!!!) and there is not only a clash between cars, but also a clash of wills.

The basic storyline is very similar to an English Movie starring Ben Affleck and Samuel Jackson – “Changing Lanes”. However, the movie has the distinct “Desi flavour”, as is with most Bollywood movies that borrow their storyline from their English counterparts. The taxi driver’s (Nana Patekar) family life is at stake, while the cool (or maybe hot!) John Abraham has a case involving his father’s will to win. The drama unfolds as each one tries to outsmart the other, making many questionable decisions along the way.

Funny, fast-paced with a song-and dance sequence in the rain (even in these movies!) 9211 is a total “time-pass” movie.

But, you will need a group of really crazy friends to enjoy the movie!