The First Fortnight at SCMHRD

My course at SCMHRD began with the Induction ceremony on 2nd of June. The induction involved the Founder of SCMHRD giving his short speech followed by that of the MD of Maruti, who was the chief guest. These were followed by speeches by the Director and the the Admin head. After a short lunch break, we were presented with a short case study and then the introductions by the faculty.

With this, the day was wrapped up along with the promise of a long and lengthy Outbound Learning (OBL) Program on Sunday, the 3rd. Sunday the 3rd is a very special day for me and I was hoping to have spent it in Mumbai itself, but unfortunately, this wasn’t the case.

Though we had to wake up early for the OBL, a group of us went out to Tamanna for dinner. The idea was to sink our teeth into non-veg, well atleast it was the case for around six of us.

The OBL is a program held every year by SCMHRD for its new batch. The purpose of the same is several fold. The primary purpose is to introduce us to each other and get to know the persons in the batch. It also aims to foster team work with a great number of team games and introduction sessions.

It was simply put, really good. The OBL was held at a small place called Lekha Farms, which is located on NH4 (the highway connecting Pune and Mumbai). We began with a set of games before breakfast.

The first game, couldn’t really be called a game, but I’ll call it “Toss the Ball”, where you simply had to call out the name of the person and toss the ball to him and her. Worked well to find out the other 22 people in my group (the entire batch of 197 was divided into about eight or so major groups and then subdivided into two groups each).

This game was followed by a Carriage-Rider game. Two persons formed a carriage by holding arms together and transported a “rider” to the other end. At this end, one rider became the chariot and vice versa and the three would return. We screwed up and got disqualified.

The third game was required two persons to hold a ball with their backs, reach upto the finish line and return. This was a relatively difficult game, but we managed to grab the second spot of four.

The fourth game was yet another one which we were disqualified from… this involved us forming a human chain and with twelve persons in a line, any human chain is majorly challenged.

We broke for breakfast after this, which was medu vadas and idlis… I must mention here, that the mess food has been pretty good so far, but this is just the end of the beginning as Winston Churchill would say.

Breakfast was followed by an extremely difficult but a hugely team oriented game, which required the entire team to assist each other to get through four increasing levels of ropes tied across two poles (imagine getting inbetween the rungs of a ladder, with the top rung higher than when I stand on my toes with my long arms stretched point upwards (I’m 180cms).
This took up the entire time upto lunch as we struggled but got it done with.

Lunch was not at all tempting, but I had to eat for the energy. The period after lunch involved us doing the Burma bridge, and me also trying the Monkey Crawl (though there wasn’t much crawling 😉 ) 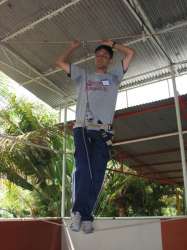 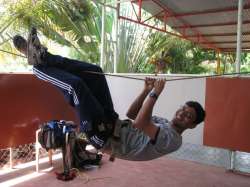 The monkey crawl was followed by a “I introduce my partner” (in a group of three) session and a team game, where we trashed the competition. Must say that yours truly was influential in coming up with the idea 😀

The last game of the day, was a sheep and shepherd game with the job of the shepherd to lead his blindfolded sheep into the penn using only a whistle. We rocked!

The day came to close with us heading back to SCMHRD, wasting some time out there and then finally hitting the beds, extremely tired.

Monday to today has just been jam packed with classes and assignments. Our foundation course exams begin on Wednesday and I’m still far behind. Most of the profs are good and I’m understanding stuff. Non-acads (gym, swimming, aerobics and yoga) will also be beginning in full force from next week, though we have been given a taste of these).

I’ve been offline most of the fortnight (with only minor mail checking and chatting) because of the schedule and also because of stupid Reliance (the the only thing you can rely on is inefficiency and lies). This was finally resolved this week.

Also had the first set of exams of the foundation course, which included Economics, Maths and Computers. My steady track record of screwing up my Maths papers hasn’t left me even now.

This post will not be complete without me stating that I have really good roomies. The first one is Aditya from Bangalore, a brain and a sportsman rolled into one. The second is Akshat, who is as mad as us. The three of us will soon be labelled the “Three Stooges” of SCMHRD.

It may have been only 15 days, but it sure feels like a long long time. The end of the beginning…

Until I get to blog again…