Those who have been reading the comments out here (not to mention the posts), would have known that I was in Pune this weekend for the SCMHRD Group Discussions and Personal Interview.

This is only my second trip to Pune, with the first one not being a pleasurable experience.

Pune as a city is still coming up. However, the opening of the Bombay-Pune highway has made travelling there extremely simple. Well, you can get to Pune from Mumbai (Bombay) in 90 minutes and it takes another 150 minutes to get from the Mumbai limits to my home!

Had a ticket for the 2.15pm bus on Saturday, but managed to get into the 12.45pm bus itself (it was half an hour late). Was stuck in Mumbai till later than 4pm and only reached Hinje Wadi around 6pm.

Transportation in Pune is a nightmare, but I was fortunate enough to get an Indica passing along the way to give me a lift from the bus stop to the hotel Tamanna Executive, the sole hotel in the area, for the cost of the tumtum, the infamous 8 seater that seats 10+.

The AC room was 1600 bucks which is a good sum of money when you want to spend a few hours. However, the proximity of the hotel to SCMHRD was primarily the reason I chose this place. 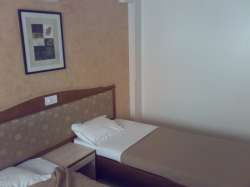 I had originally planned to take a walk in the evening. However, I was really tired after the travel and so decided to stay put and watch Twister and Chain Reaction back to back. Stuck to my room, ordered room service for both dinner and breakfast and only left it when I checked out on Sunday morning.

The walk from the hotel to SCMHRD was about five minutes. The SCMHRD campus is clean and peaceful, which is pretty much the case in this section of Pune.

The process began with the GD rounds. There were two discussions, the first involving this video:

(If you can’t see the video above then view it on YouTube directly.)

We were then asked to discuss the same and give a short caption as well.

The next round was a case-study. I must mention here than my group had only six members and the discussion were really civilized. This must be one of the reasons five of us progressed to the next round.

The next round involved a short essay, which was later followed by the interview. Now, I shall await the results which are expected on 24th. I really hope I get through !

The journey back to Mumbai was really tiresome, I guess because it involved me having to wait for over three hours (most of it standing) for a Volvo to take me back. I had company so it wasn’t all that boring. And we did pop into a McDonalds there (read first chance to eat chicken) to rest our aching legs!

Got home surprisingly fast and I walked in around 12am to find my VPS down. Hit the bed after working on getting the sites up.

The last two days have been equally hectic, but that is for another post.