Sunday, our 2nd day in New York was spent with Ashwina’s cousin and his wife in New Jersey. On Monday, we set out to explore the city. Destination: Times Square.

We’ve found our way to New York right in the middle of hurricane season with Hurricane Florence heading towards the US East Coast. Although it is still a few days away, we’ve generally seen rather wet weather since our arrival here on Saturday. Given it is my first trip to New York, we have a list of very touristic things to do. Two of which are Top of the Rock and the Empire State Building. As the former has rather set times to visit, we decided to go to 49th Street and walk over to the Rockefeller Center.

Since our completely chaotic use of the subway on Saturday, I would like to say that I’m a lot more proficient at researching the route via Google Maps and Citymapper. We took the R line from Cortlandt St Station which opened the day we arrived, after 17 years since being damaged on 9/11. We rode the subway stops to 49th Street as that was the closest station to the Rockefeller Center. I’m starting to appreciate how much of New York can be traversed underground. We walked the entire distance from 49th Street station to our destination without seeing daylight.

We arrived at the ticket booth for Top of the Rock and the person at the counter told us that there was zero visibility. Thankfully, we had not purchased advance tickets! Not intending to splurge a lot of cash to just see fog, we left and found our way into the light rains outside. We set out towards Times Square because it seemed as good a time as any. 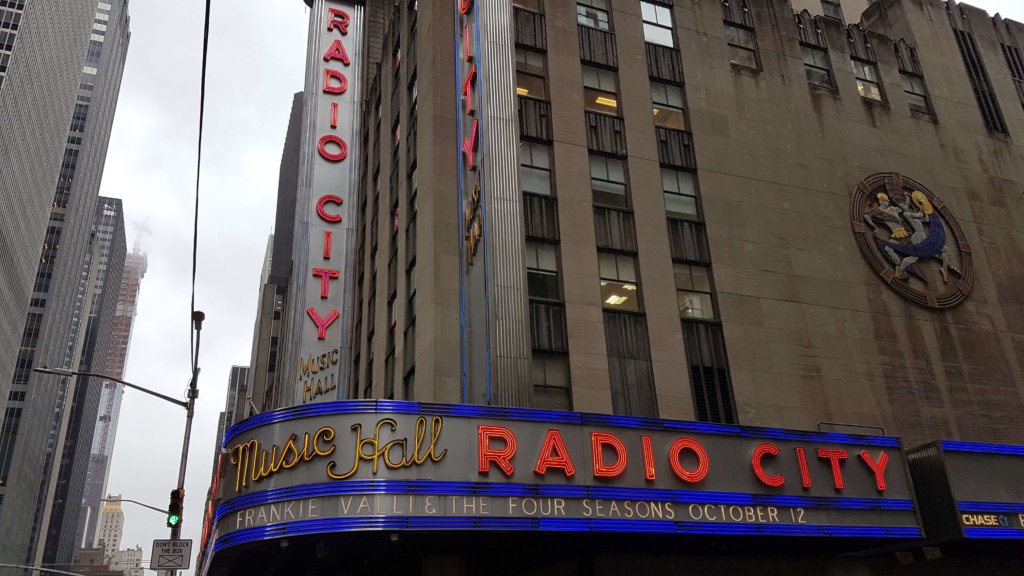 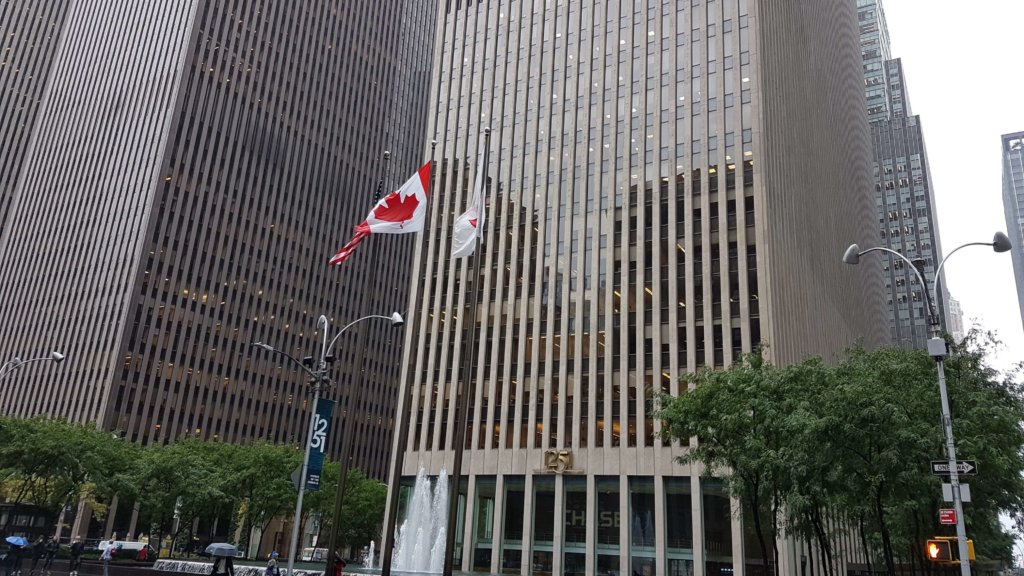 1251 Avenue of the Americas

Since we had to limit ourselves to ground level, we walked towards Times Square. Even if, like me, you haven’t been to Times Square, it will be familiar to you from several movies. In spite of the rains, I clicked several good photographs with my Samsung S7 Edge. 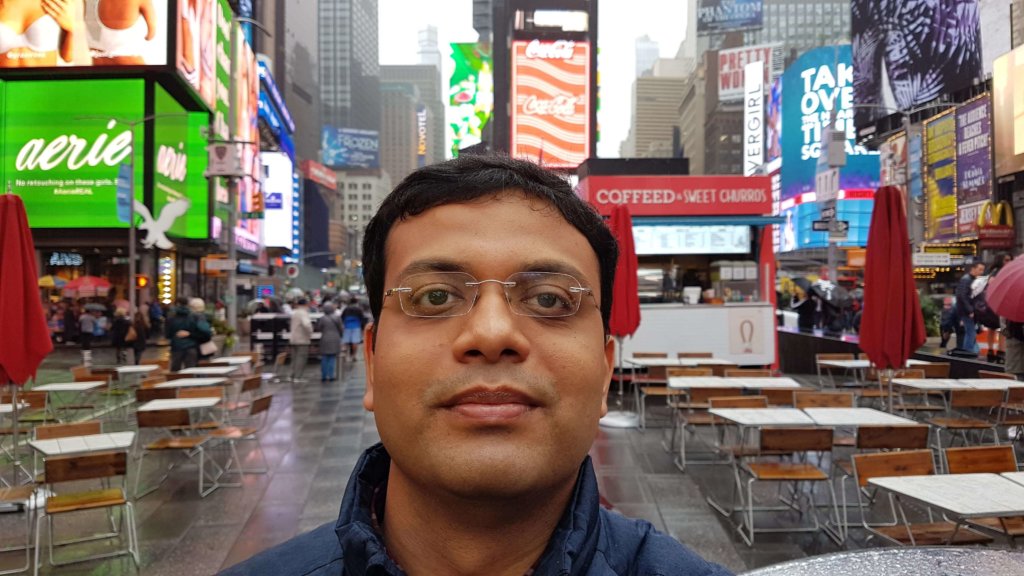 With Times Square behind me 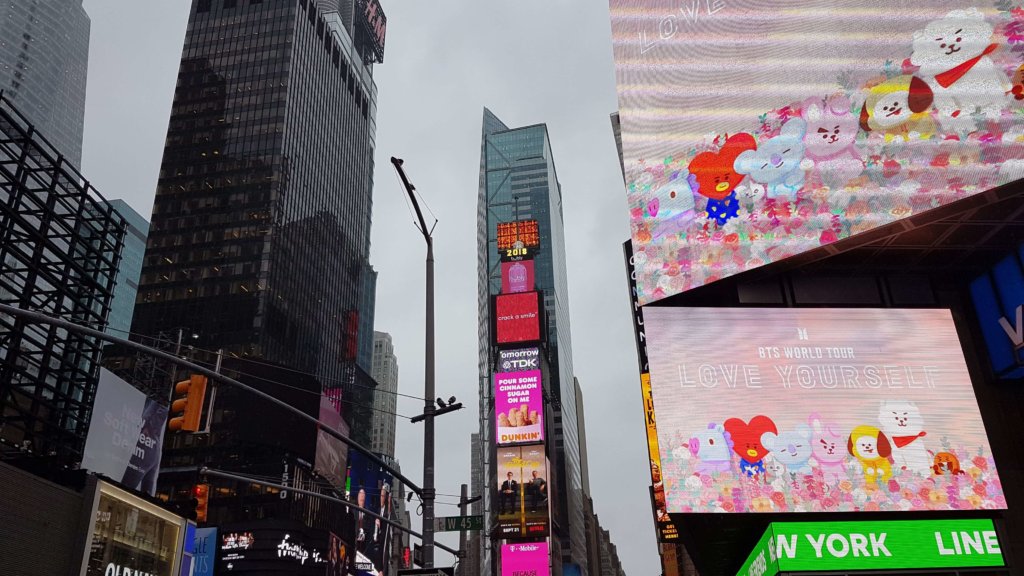 The ball on Times Square 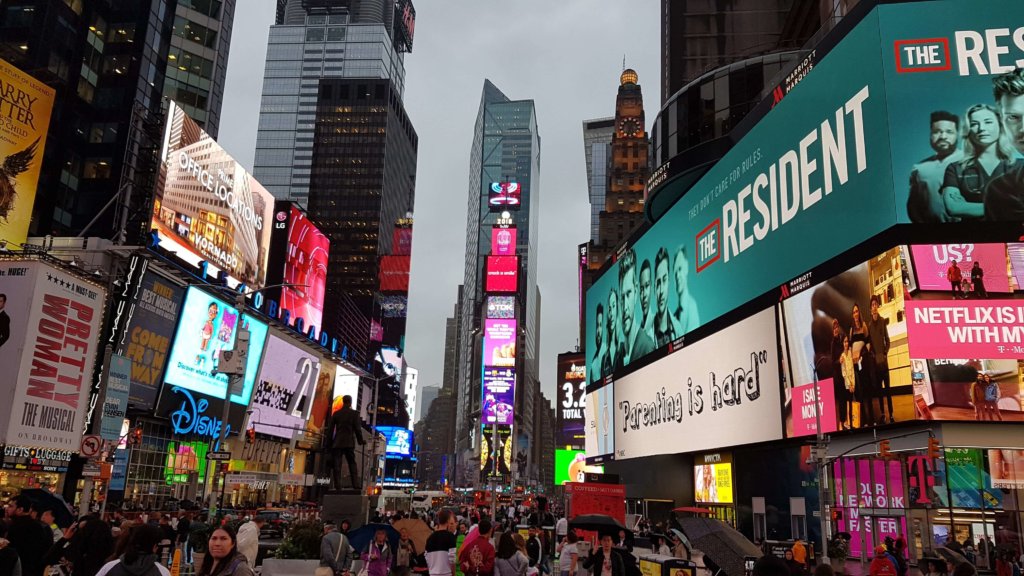 Times Square with the Ball 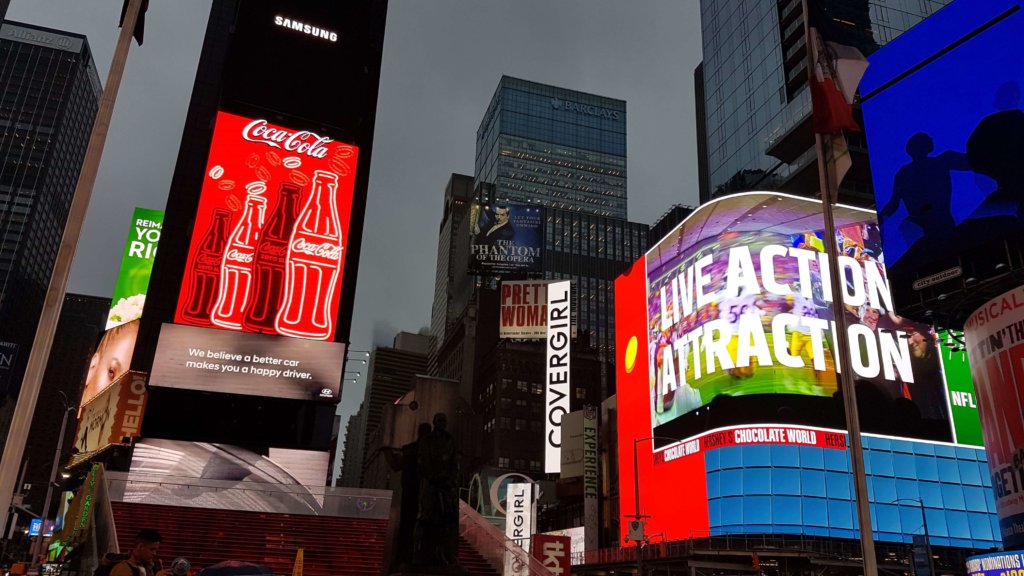 As we were already quite hungry, we entered the Hard Rock Cafe to grab an evening snack. I have heard about the massive portion sizes here and we witnessed this with the extra large bowl of nachos. Food was not bad, the alcohol was good, but, above all the music was great.

With our bellies full, we wandered a bit more around Times Square and even tried to see if we could get some good tickets for a play on Broadway. With nothing enticing enough playing, we caught the W back to Cortlandt St Station. 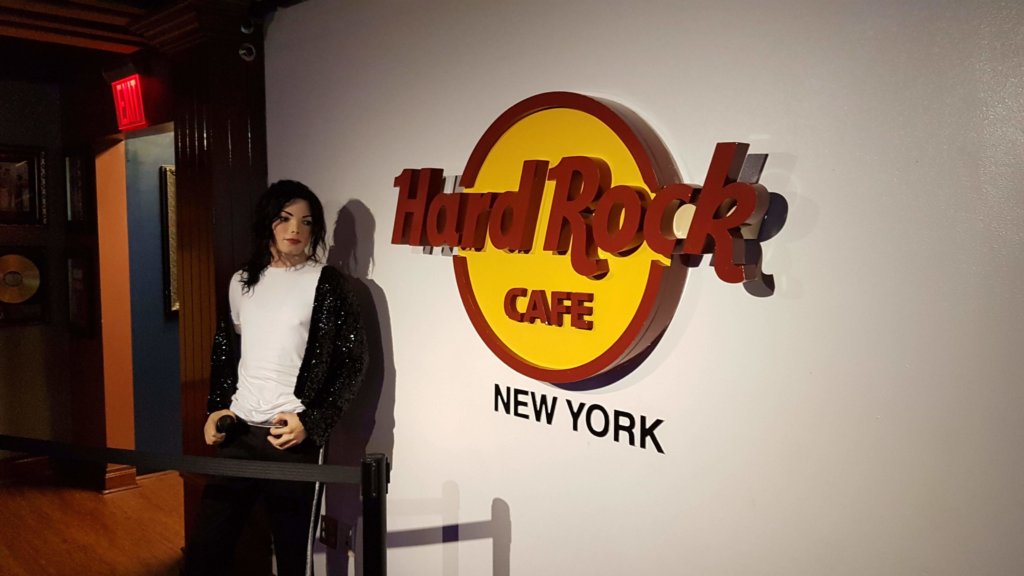 The Oculus and the World Trade Center

One of the exits at Cortlandt St Station goes directly into the newly built Oculus. The Oculus functions as a transportation hub as well as a shopping mall with the likes of several popular brands including L.K.Bennett. We walked around the inside of the Oculus which is a massive open space and you don’t get the sense of size when you look at the design from the outside. 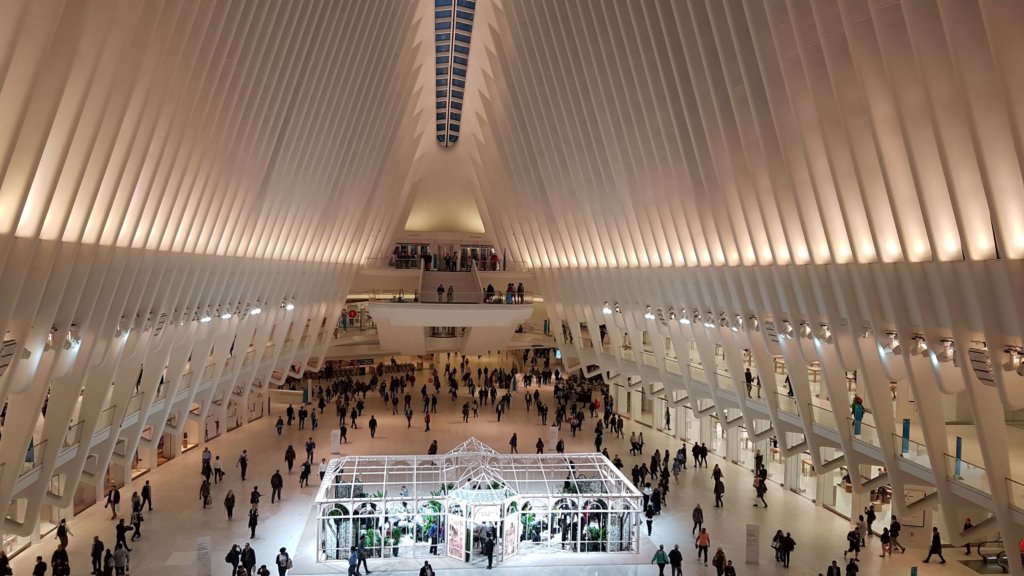 Inside of the Oculus, New York City 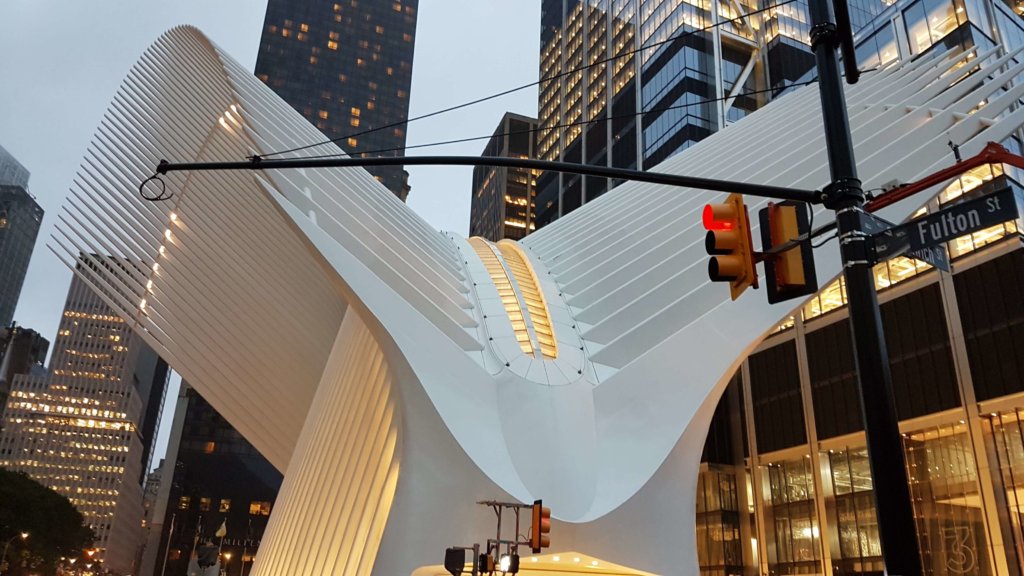 The Oculus from outside

Emerging from the Oculus takes you right in front of the 9/11 Memorial where we walked around the pond to see the massive pools where the two towers used to stand. In 2001, I was in my second year at SPCE in India when we saw the news. It’s little wonder that September 11 will be forever be etched in our memories. 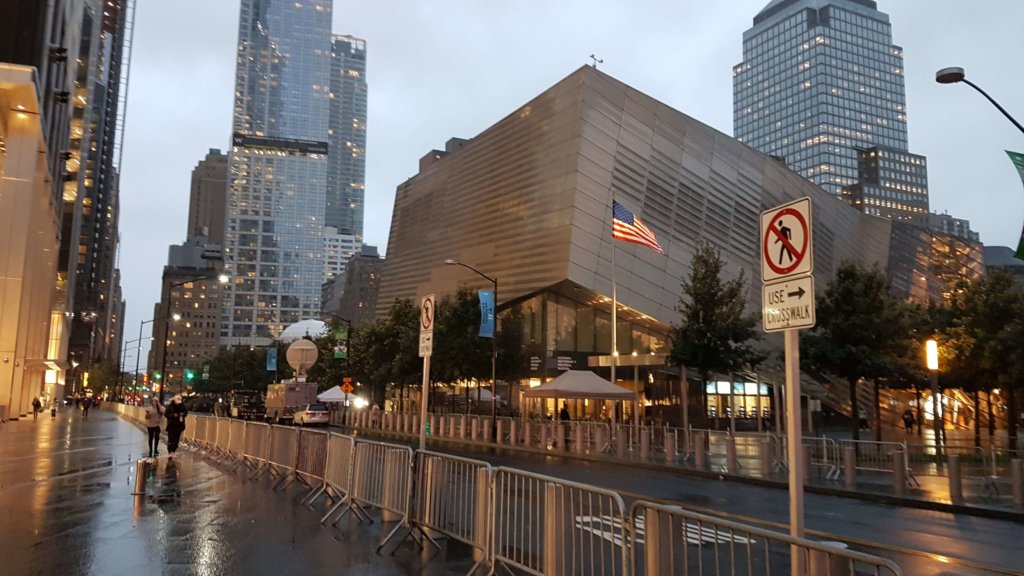 With exhaustion catching up with us and also because we needed to make an early start on Tuesday, Ashwina and I headed back to our service apartment to call it a night.