Long long ago, a young man Klan McCullan was accused of selling weaponry to both the Scots and the French. Sentenced to a lifetime of the iron mask, Klan swears that his children will take on the world.

Fast forward into the not so distant future and his descendent James runs one of the largest weapons manufacturing corporations in the world. James’ company has sold four highly powerful nanotechnology based weapons to the NATO and the rest of the movie revolves around these four weapons.

The rest of the movie is the attempt of the Baroness (Sienna Miller) and her team trying to steal and take control of the weapons. And, in steps General Hawk (Dennis Quaid) and his team of G.I. Joes. 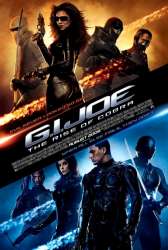 G.I. Joe: The Rise of Cobra turned out to be an exciting movie to watch. While it isn’t spectacular, it definitely is well above average. The special effects could have done with some improvement. The acting was decent and the sprinkling of jokes did light up the movie. The weapons technology is phenomenal. I would love to own a baby rail gun!

Overall, I’ll rate this movie as a 7/10, simply because I think a sci-fi / technology movie deserves much better special effects.

Have you seen this movie yet? If so, what do you think about it? Written a review of it? point me to it.

5 thoughts on “Movie Review: G.I. Joe: The Rise of Cobra”