Movie review: Now You See Me

Who doesn’t love a bit of magic? Everyone has heard of Harry Houdini and I remember watching David Copperfield as a kid. Now You See Me is a movie that will both amaze you and excite you. 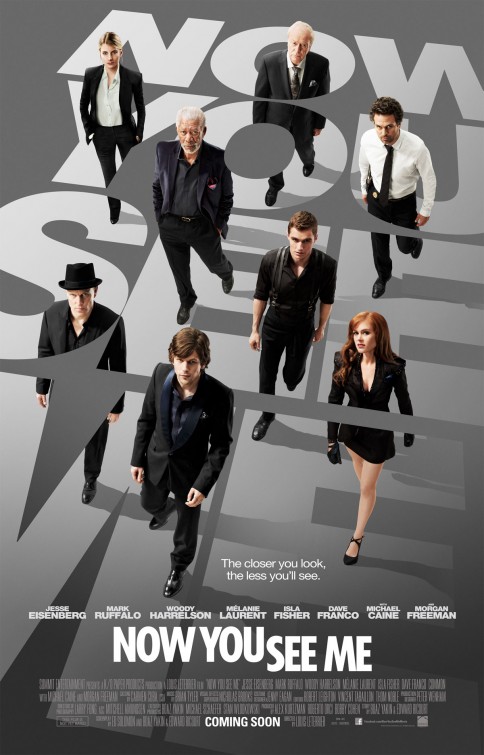 NOW YOU SEE ME pits an elite FBI squad in a game of cat and mouse against “The Four Horsemen”, a super-team of the world’s greatest illusionists. “The Four Horsemen” pull off a series of daring heists against corrupt business leaders during their performances, showering the stolen profits on their audience while staying one step ahead of the law.

Now You See Me has an exciting story line that keeps you at the edge of your seats as the magicians pull off their magic tricks and as Thaddeus attempts to explain them and Dylan attempts to catch them. A street chase and a car chase later, the Four Horsemen are ready to pull of their greatest heist. Will Dylan finally catch up with them before their disappearing act?

Best known for his recent performance in Avengers as Bruce Bannar, Mark Rufallo is his usual self. Morgan Freeman plays his role to perfection. He quietly appears as a supporting star in several movies and is still able to deliver the same stellar performance. Jesse delivers his charismatic style similar to when he played Mark Zuckerberg in The Social Network.

And, the ending is simply awesome. To quote J. Daniel Atlas:

I did *not* see that coming.