So how was your Christmas?

Hadn’t gone for midnight mass so began Christmas day with the 9.30am Mass. The church was pretty much empty because I guess most had gone the previous night. Ended up doing the Prayer of the Faithful.
Had planned on wearing my coat but thought I would be overdressed. When I got there saw many in coats. I am sure if I wore the coat, no one else would have done the same?

Spent a good deal of the day at home, but for sometime when I visited the saloon in a desperate quest to look even more handsome than I already am 😉 (I know that I am really really vain!)

Dressed up in my new maroon shirt and Madam A and I left together by rick to Bandra. Got stuck in such horrible traffic that it was really very irritating. Thankfully I know all the roads on the way to Bandra and was able to bypass a good section of the traffic.

Reached there way before the others and so just walked up and down the road waiting for them to come!


Finally got in around 9pm and realized we were early!

Took some pictures of us. Am not going to post all, but here is a good one of Madam A and me.

Well we jived a good two hours at a stretch until we were really exhausted and decided to take a break. Well, I’ve improved. Have progressed from a guy with two left feet to one who could dance to one who can dance with the music! 😀
Havilah sure was shocked to see me jiving well (I won’t boast about my dancing skills).

Here’s another pic of the group when we were well exhausted and sleepy! 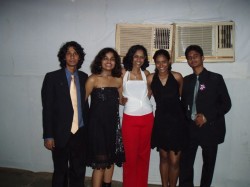 We partied on till 4am. Madam A and I missed a good part of the slow music because we were busy sipping down some hot coffee. Needed when your throats are in a mess and its early in the morning!

Got the last slow number because they shut off the music. We headed off home. Had some trouble getting a rick in the morning. But we reached home around 4.45am and since all of us were there did some timepass till 5.30am.

Perfect end to a great Christmas night! One of my best Christmas’ so far 🙂