The possibilities are endless when you put your mind to it. At least that’s what this movie intends us to think.

Eddie Morra is an out of work writer trying to write his first great book. Weeks of failure and the subsequent rejection by his girlfriend and Eddie believes that this is the beginning of the end. Until he meets his brother-in-law who gives him an experimental drug that brings out the 100% in him. With great power comes great responsibility and also a lot of enemies. That seemingly innocent pill soon heralds a lot of fun and a lot of chaos for Eddie. Thus begins his desperate journey to return to his former self. 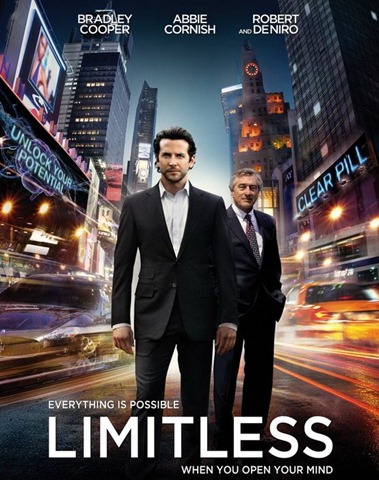 Limitless is a movie with a great concept with some rather decent acting. The plot is well written an all the actors play their roles. I love the concept of the crazy pill. Can I get one of those?

However, with the pill comes the consequences and that is something the movie depicts rather clearly. Withdrawal symptoms, desperation and sickness come with the territory. Bradley Cooper does a great job at portraying Eddie in his various forms. De Niro plays his role as always, having matured as an actor over the many many years.

The movie does tend to get rather unbelievable at times. Some parts of confusion between the series of events in the start and later on in the movie did make me wonder at the flow of the script. However, this remains as a good one time watch, much like most of the movies being churned out today.